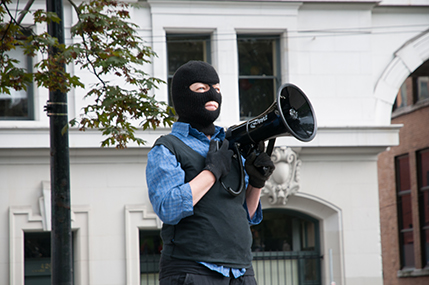 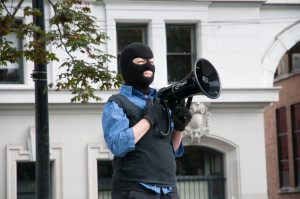 Public Address is an ongoing project initiated by Leannej and My Name Is Scot, which was exhibited in Sofia, Bulgaria at the Red House Centre for Culture and Debate. Public Address was curated by Biliana Velkova and Yana Kostova and featured text based work from Bulgarian based artists. The project was initiated during Leannej and My Name Is Scot’s two-month stay at the Sofia Art Residency in Sofia, which coincided with the first anniversary of the almost year-long public protests against government corruption  in Bulgaria.

Books and Zines by Bulgarian and International Artists

Public Address explores notions of activism, authority and the ways and means of disseminating public and private  messages. As part of the project, Leannej and My Name Is Scot collected zines and artist books by Bulgarian writers and artists, which they will be presenting for the Vancouver Art Book Fair. Featured artists include Sevda Semer, Alla Georgieva, Biliana Velkova, Steven Guermeur, Kiril Prashkov, Lazar Lyutakov, Voin de Voin, artists from the Bulgarian Queer Forum, and Blood Becomes Water.

New Book Monument by Leannej and My Name is Scot

Cover image from Monument by My Name Is Scot.

During the Vancouver Art Book Fair, Leannej and My Name Is Scot will also be launching their new book, Monument, published by Publication Studios in Vancouver. Monument features images made by My Name Is Scot and texts written by Leannej, chronicling  their two months of living and working in Bulgaria. The texts and images from Monument were initially featured on the Geist.com blog, Postcards From Sofia.